Gingkotoxin is a neurotoxin present in Gingko biloba. The seeds are especially rich in this toxin, but it has been found in other parts of the tree as well, including the leaves. The concentration of toxin is much lower in the leaves compared to the seeds. 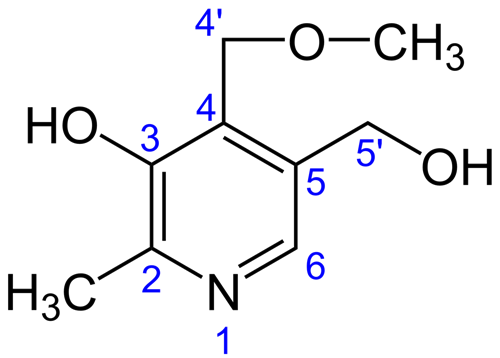 It is difficult to know exactly how much gingkotoxin that is present in an individual seed or leaf, because this vary a lot. In one study that involved raw seeds from eight different locations in Japan, the concentrations of gingkotoxin varied from just 0.173 mg/g of seed to 0.4 mg/g of seed. Time of year is also a factor of importance here, and August is typically the month when gingko seeds contain their highest level of gingkotoxin.

Gingkotoxin is an antivitamin structurally related to vitamin B6 (pyridoxine). An antivitamin is a substance that prevents a vitamin from exerting its typical biological effect. Most antivitamins have a chemical structure that is similar to that of the corresponding vitamin.

Eating a lot of ginkgo gametophyte

The gametophytes inside the seeds of a ginkgo biloba tree are rather similar to nuts and are eaten in many parts of Asia. Poisoning have chiefly occurred in people who have been eating large quantities of the ginkgo gametophyte over a prolonged period of time. Even though gingkotoxin is known to be present in many commercially available alternative medicin products that include gingko biloba, only a small amount of poisoning cases stem from the ingestion of such products. Instead, it is the consumption of gametophyte that forms the bulk of the known cases.

Will cooking destroy the toxin?

No. Gingkotoxin is heat-stable and is not destroyed by cooking.

Since gingkotoxin is a neurotoxin, it produces neurological symptoms.

The symptoms are the result of an imbalance between excitation and inhibition of neurotransmitters.

Children are more sensitive than adults.

Since gingkotoxin is an antivitamin that causes a scarcity of the vitamin B6 in the human body, the standard treatment for gingkotoxin poisoning includes the administration of B6.

Gingkotoxin is not unique to the Ginkgo biloba tree; it can be found in plants belonging to the genus Albizia as well.

None of the Albizia species are utilized as food by humans.

You can learn more about gingkotoxin at Pubchem, in the National Library of Medicin